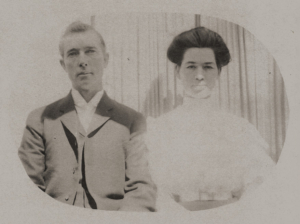 Originally, the Midas Schoolhouse provided a museum site for Friends of Midas.

After the building burned, however, Friends of Midas discovered that it was prohibitively expensive for a small nonprofit organization to construct a new museum. Located in an old town way out in the desert added to the expense: insurance was essentially unavailable. For a few years, Friends of Midas had no way of displaying its many artifacts.

In 2007, Friends of Midas acquired a large one-lunger engine that had been the sole source of water for Midas residents well into the 1930s. The engine was beautifully restored by Rick Isaeff and Andy Richards, and the need for a display area became urgent.

On a parcel near the center of town, Friends of Midas constructed two small buildings. The parcel itself is historically important as the location of the home of the Macy Family.

Frank and Bell Macy arrived in the area in October 1907, right after their wedding in Idaho, and lived here the rest of their lives. Their first daughter was the first acknowledged child born in Midas, and they raised four girls to adulthood in this little town. Frank Macy was a miner, a barber, Justice of the Peace, School Board Clerk, and sometimes coroner. In 1963, the Macy house burned when a large section of town was destroyed by a propane explosion, but the property remained in the family. 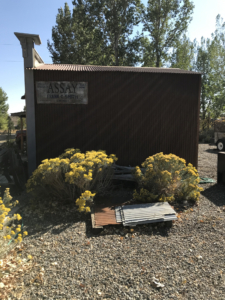 Frank Smith was the assayer for the Gold Circle Consolidated Mining Company in the 1930s.

In 2004, Friends of Midas purchased the two Macy lots from Dale and Vicki Keller. Dale was the son of Francis Macy Keller, the youngest of the four daughters. It soon became apparent that this parcel would provide an ideal display location, and two small buildings were soon constructed.

The buildings were designed to look like the small, wooden buildings that had lined the Main Street of Midas in its early years.

One building has a wooden porch with an overhang, and it appears like a fuel shop from the 1920s. Its neighbor replicates an assay shop. Between the two is a glass-fronted display area for the one-lunger, and a tall, glass-topped gas pump.

Visitors are encouraged to look through the windows at the various items that have been acquired by Friends of Midas, but they are not allowed to enter the buildings. Thus, construction and insurance expenses were greatly reduced to a much more manageable level.