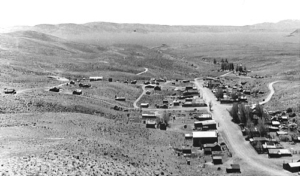 Midas is surrounded by low hills that were perfect for the 1910 jester. Photograph from the Northeastern Nevada Museum collections, Elko.

Residents of Midas, a gold camp in Elko County, were jolted from bed at 3:30 a.m. on April 27, 1910, when a blast rocked the countryside and shook buildings.

Running from their houses and cabins, still in their gowns and nightshirts, they heard a voice in the darkness, “Everybody up! Halley’s comet is about to appear!”

Tousled heads and bleary eyes turned toward a nearby hill just east of town as a very bright light appeared. They were suddenly awake and watched in amazement and wonder as the light lit the sky for about twenty minutes. Then it faded away and the morning star appeared. It was indeed a beautiful sight.

Everyone was thrilled. Sighting the famed comet was a once in a lifetime event. It crosses the sky only about once every 75 years, give or take a couple of years. The great American humorist Mark Twain claimed to have been born during the comet’s last sighting in 1835 and maintained that he would leave this life when it next appeared.

Wide awake now but hoping to salvage a little sleep, Midas residents went back to bed. They would learn, when the news reached Midas a couple of days later, that Twain had passed away on April 21. Close enough, most commented.

Dick Avery, a night shift miner at the Rex Mine, harbored a secret most the of following day. After getting a snoot full at one of the bars, he told all about the previous night when Halley’s Comet visited Midas.

He had gotten a long pole about thirty feet in length. After fastening a bundle of waste cloth on one end, he saturated it with oil then detonated a stick of dynamite to wake the town.

After announcing the comet’s coming, he raced to the hill top which was, more or less, the proper direction for sighting the celestial wonder. He lit the torch and proceeded to fake the miracle of the heavens. He did such a good job that everyone, bar none, thought they had seen the famous comet.

Many of those who had walked a half mile or so to view Avery’s Comet were not entirely pleased about the hoax. In fact, some were outright mad. Others chuckled at the joke played on them. After all, it put some excitement and fun into a sometimes dull life of a remote mining camp. 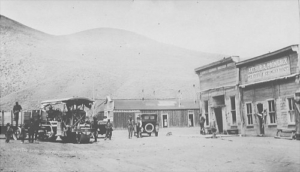 Midas was named for the legendary Greek king whose touched turned everything to gold. Before that it was called Gold Circle and Summit, at different times, of course.

Howard Hickson is an accomplished Nevada historian and Distinguished Nevadan who directed the Northeastern Nevada Museum in Elko for several years. His many fine stories about the history of northern Nevada, such as this one about Midas, have been collected and made available by Great Basin College.

Sources: Much of the research for this article was done more than twenty years ago by Claudia Riordan when she was on the staff of the Northeastern Nevada Museum, Elko. An excellent source for town names and brief histories is Nevada Place Names by Helen S. Carlson, University of Nevada Press, Reno, 1974.