The murder of Thomas Bean in February of 1908 convinced Midas residents that a jail was needed in the new town. 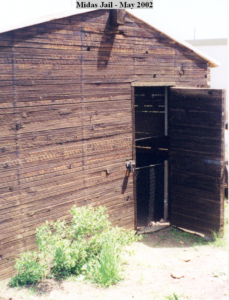 On March 3, 1908, the Elko County Board of Commissioners appointed Guy Harbin as Deputy Sheriff and tasked him with building a sturdy jail. Interlacing 2×4 boards on their sides, Guy and his local colleagues built a small but sturdy building with one windowless room in less than a month.

Any record of the occupants of the Midas Jail has been lost over the years, but former residents recall that it held more drunks than any other type of transgressor. Likely, the last jailbird was released well before 1960.

In 2000, the Midas Jail was donated to Friends of Midas, which immediately restored the tiny facility. Harsh winters and recent floods have taken their toll, however. The second-oldest building in Midas, the jail still stands but precariously. 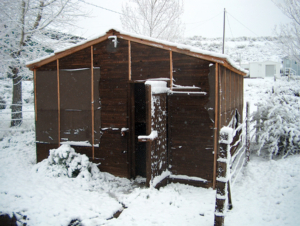