As the population came and went from this little community, Elko County found itself owning several parcels of land because property taxes went unpaid. 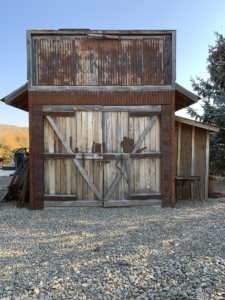 In 2000, Elko County Manager George Boucher contacted Friends of Midas President Dan Bennett about the conservation of some of those lots at the south end of town. Located near Midas Creek, the lots had the potential of disturbing the area’s water quality if they were developed for residential or business purposes. The County proposed that they be preserved as a park under the maintenance of Friends of Midas.

Over the past 20 years, the area has been transformed from a corner covered with sagebrush to a beautiful park with tall trees and native flowers. Donations from nearby ranches ensured the display of wagons and agricultural implements. Included in the displays are a 19th century horse-powered hay baler, a wagon from the John G. Taylor ranching empire, a horse-drawn road grader, and a fresno used in the construction of the Willow Creek and Rock Creek canals.

At one end of the park, a building was constructed to provide storage for Friends of Midas equipment, but designed to replicate an old blacksmith shop with a false front. 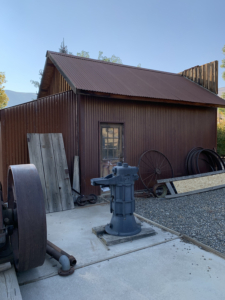 Mining equipment and old postal wagons surround the shop. The shop also houses a century-old cider press, which was originally used at the Rebel Creek Ranch near Orovada. It was donated by Les and Cherie Sweeney in 2018. Les’s dad, Paul Sweeney, obtained the press from Clarence Jackson, grandson-in-law of E. P. Ellison who started Ellison Ranching Co. in 1910. The press still works, and Friends of Midas anticipates making cider from Midas apples in the fall of 2021.

In 2019, Elko County deeded the property to Friends of Midas, which will continue to maintain it as a quiet place of reflection. This lovely park offers a shady welcome to Midas visitors, especially deer, which are often spotted grazing among the trees.