At some point in the early 1920s, Midas residents constructed a large building for social gatherings. 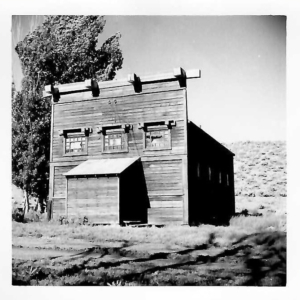 Located at the north end of town, the Town Hall had a false front decorated with stained glass windows and consisted of one large room with an exquisite hardwood floor suitable for dancing and tall windows for light.

For decades, it was the location of school graduations, celebratory dances, and club meetings. The Town Hall served as the official location for voters to cast their ballots in state and national elections and a stage for visiting theatrical groups. On occasional Sundays, visiting pastors held church services of various denominations, and a community Christmas tree welcomed Santa who distributed gifts to local children. 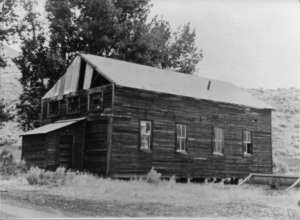 As the population dwindled, no one used or maintained the building, and it slowly disintegrated.

The false front fell off after 1953, and it was boarded up in the 1970s. In 1986, the hardwood floor was removed and reinstalled in a local saloon; the remainder of the building was demolished. In its place now stands the town’s volunteer fire station.

More information may be found in A Century of Enthusiasm.