A brief history of Midas, Nevada

In 1907, gold was first discovered in the remote northern Nevada canyon that now shelters the town of Midas. 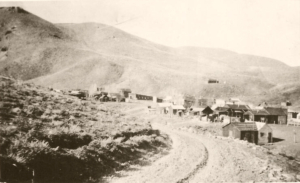 Fortune-seekers quickly constructed homes and businesses, and within a year, a substantial town was in place. First named Gold Circle, the town became Midas when the Federal Government refused to authorize another post office in Nevada with the word “gold” in its name.

From its beginning until World War II, Midas was one of the most productive mining camps in Nevada. Although the official name of the mining district is Gold Circle, the ore also contained a considerable amount of silver, copper, lead, and zinc.

The number of residents ebbed and flowed with the closing and opening of mines, and for many years, Midas had saloons and restaurants, red-light districts, a jail, a town hall, and a first-class, two-room school house.

Dances were popular; local elections mattered; and murders were committed on Main Street. In 1927, a modern schoolhouse opened for the local kids. But no church was ever built. After World War II, mining declined, and the town’s fortunes waned.

Midas is often found on ghost town lists, but it was never completely abandoned. Since the 1960s, it has been a popular destination for hunters and recreationists. Many people, including some who had lived in Midas as children, retired to the small town, which now consists of a few older buildings and several new vacation homes along a tree-lined dirt road. It’s a quiet place, populated by a handful of people year-round, but the part-time residents exponentially expand the population when they arrive on weekends and holidays.

Located in a historic building in the center of town, the Midas Bighorn Saloon is open Thursdays through Sundays from 11 am until 8pm (or so). Check out the saloon’s Facebook page and plan to belly up to its 120-year-old bar soon!

Mining returned to the area in 1998 on a scale unimagined by earlier Midas miners. Currently owned by Hecla Mining, the Midas Mine is a sophisticated milling and underground excavating operation. Unlike earlier years, however, mining employees don’t live in Midas. They commute from larger towns that have amenities not found in Midas, such as health care and schools.

Although small in size, Midas is big in heart, and the Friends of Midas invite you to visit our favorite town.

Whether it’s to bird-watch or bird-hunt, enjoy a drink at the bar or sit on a porch, ride a quad or hike up the canyon, you can find several ways to pass your time here. Until then, we hope you’ll enjoy your visit through this website. To learn more about the history of our wonderful little town, you’ll want to buy a copy of A Century of Enthusiasm: Midas, Nevada.