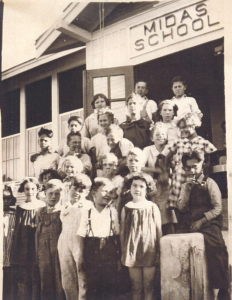 In 1926, Midas voters approved a bond to finance the construction of a new schoolhouse for their children. For nearly 20 years, students had climbed a hill to two small buildings that were quickly becoming decrepit. The new

Like nearly all of Nevada’s mining towns in the first half of the 20th century, the population of Midas ebbed and flowed as the nearby mines opened and closed.

spacious two-room building, painted white with green trim and roof, opened to local students in 1927 and served the area for almost 50 years. Upon its completion, the State of Nevada complimented it as “modern in every respect.”

When the area was booming in the late 1920s and well into the 1930s, the school employed two teachers, one of whom served as Principal. The first teacher/Principal of the Midas School was Miss Margaret Watson. One of the first children to graduate from eighth grade 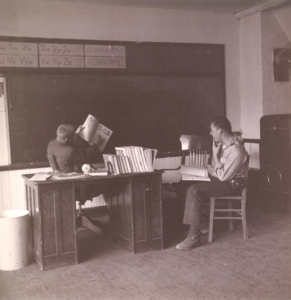 (then the level required by state law) was Edna Wilkerson Timmons who later named Miss Watson as her favorite teacher.

During its heydays, the Midas School welcomed 30 to 40 kids each school year. In addition to attending class in this superb building, the children utilized state-of-the-art outhouses (one for boys and one for girls) and played on sturdy equipment, such as swings and a witch’s-hat merry-go-round. When the number of students were reduced to a handful, the teacher lived in one room of the building and taught in the other. 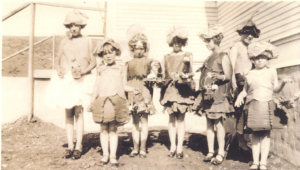 Although students continued to come from neighboring ranches, the school population sometimes did not meet the three-student minimum required by the State of Nevada. In 1972, the Elko County School District sold the building into private ownership where it was used as hunting lodge for many years. The playground equipment continued to be enjoyed by all visiting kids.

In the late 1990s, gold mining returned at a scale unimagined by the earliest Midas miners. Although the Ken Snyder Mine and Midas Mill employed over 200 people, their families did not live in Midas. The mining company purchased the school building to use as an office and restored it to its 1927 splendor. In 1999, at a ceremony attended by Mrs. Timmons and many 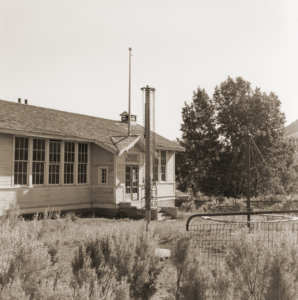 of the now-grown students of the Midas School, the company deeded the beautiful building, the outhouses, the playground equipment, and the property to Friends of Midas.

On the classroom side of the building, a small museum was installed. The teacher’s apartment became a wonderful location for community parties and meetings, and once again, the Midas School was a hub for the town. In 2004, the building was added to the both the national and state Registers of Historic Places.

Tragically, a fire in 2005 destroyed the building and all of its contents. Only the outhouses and playground equipment survived.

The property is still owned by Friends of Midas. More information, including a list of Midas teachers, may be found in A Century of Enthusiasm.