A Showcase of Historic Artifacts

Friends of Midas welcomes donations of all kinds of interesting items related to the town and its major industries of mining, ranching, and recreation. Over the past 30 years, the Friends of Midas collection has grown to include many unique artifacts that help to tell the story of what it has been like to live in this remote corner of Nevada. This page will showcase these artifacts, one or two at a time, through a randomized and rotating exhibit. Check back often to see what’s up next! 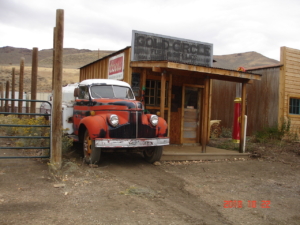 Midas’s early mines depended on diesel, which was brought to town in trucks like this 1947 Studebaker. Owned by Jeff Mellen, this truck sat in nearby Golconda until Gene Casci arranged for it to be brought to Midas and parked near FOM’s gas station replica. The building behind the truck displays many items that might be found in a fuel shop in the 1920s and 1930s. Peek through the windows the next time you’re in town!

To the right of the small buildings is a century-old hay wagon, which was pulled by horses. Wagons such as this one were used on the nearby ranches and to haul supplies to Midas during the early part of the 20th century. Together, these vehicles demonstrate the rapid change in modes of transportation during the first half of the 20th century.