At Midas, for decades, an old husk of a car lay on its side perched on the hill above the old ghost town, most old husks are anonymous either by accident or design. 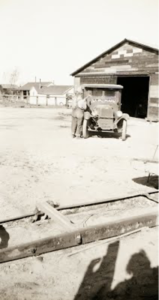 Driven by Irene True and owned with her husband, Courtes A. True, this car provided freight and passenger delivery between Winnemucca and Midas. Location unknown at this time.

Broken down and left or stripped and left, they take their time rusting.  Not enough moisture in the desert to make a quick job of it.  They can hold their place as a strange monument to carelessness for decades.  Mrs. True’s car was different.  Mrs. True’s car was left on that hillside on purpose.

For decades it served a noble cause.  Providing mail service, occasional food deliveries, and even, when asked nicely, a ride either out to the old camp, or into town. Town being Winnemucca.  Irene True and her husband ran that stage well into the 1930s.

Of course, especially during the thirties, there had to be repairs.  Many repairs.  And Mr. True was not a mechanic.  He could do the usual things, change oil, repair tires, keep water in it, and gas it up.  More than that he could not.  This created extra expenses for the stage line.  Irene had to find a mechanic who would work on her hard used and aging vehicle.  Work on it, and, work on it cheap.  Not an easy combination then or any other time.

Still, she persevered.  She and the old car made it out to Midas to deliver the mail increasingly on their own.

Mr. True had several health issues and found it hard to make the sixty-mile one way trip on a regular basis.  Irene didn’t complain.  She did start staying overnight in the canyon when weather was bad.   And sometimes weather, or just the old car, made the trip extra-long.  Rarely, the rig got pulled into Midas.

Irene’d  just shrug and start organizing the repairs. Oddly, and it didn’t happen in the winter, but on a really hot August day, the old car stopped.  Almost to the canyon, just up the hill.  She could have coasted the rest of the way down the hill. Instead, she steered the car off the road and got out of it, slamming the door.  She kicked one tire in disgust, then stood beside the stubborn beast shaking her head.  At last, she went to the edge of the hill and hallooed until somebody noticed. 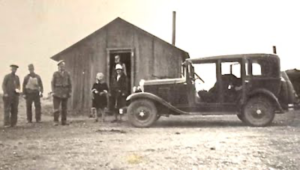 People came outside to see what was wrong.  She just waved them up the hill.  When everybody was there, she distributed the mail up on that hillside, separated out the groceries, smiling as she did so. She refused the offer of help for the old car.  Just shook her head. When everything had been distributed, she reached into the glove box and pulled out a beautiful pearl handled forty four.  She patted the old car’s hood once then put a bullet through the engine block.

She patted the old car’s hood once then put a bullet through the engine block.

She gathered up her belongings and walked downhill to Primeaux’s store.  She didn’t say anything on the hike down and never did say anything.  She caught a ride into town with one of the bosses from the Esmeralda Mill.

During that long ride she didn’t explain.  She never did.  Though she visited in the canyon for decades after that she made no effort to haul away the old car.  It stayed on the side of the hill where she’d shot it.  Unmourned by Irene and unmoved by anyone else.  Even now a bit of rust marks the place of its passing, just a little, everything else is gone.

Barbara Powell attended the Midas School in the 1950s and knew Alma Irene True who passed away in 1966. Barbara originally published this piece on her personal website that featured many wonderful old Nevada stories. The website is no longer available as Barbara passed away in Winnemucca in 2020.