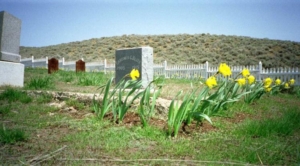 In 1995, Barrick Gold transferred ownership of a large parcel of land, centered around the Midas Cemetery, to Elko County. The County has authorized Friends of Midas to maintain the site. In the years since, the white picket fence was recreated; commemorative markers were installed; and the ashes of Midas residents have also found their final resting place here.

Visitors are welcome at the Midas Cemetery, a quiet and peaceful place with an exceptional view out into the nearby valleys.

Maintenance and repair work are planned for 2021. If you are interested in volunteering or providing other support, please contact Friends of Midas.

Additional information about the Midas Cemetery may be found in A Century of Enthusiasm and also at the cemetery’s page on Find A Grave. Many thanks to Larry Estes, a Midas neighbor, who has greatly enhanced that page! Larry attached individual memorials for those buried in the Midas Cemetery and added photos that he took during his visit to the cemetery. His good work has ensured that the final resting places for many Midas residents will not be forgotten.